Witnessing a seed developing into a fully grown plant is one of the greatest satisfaction in gardening. However, seed sprouting is also a delicate process that requires adequate conditions where the growing medium plays a key role. What should you choose? Starting mix or potting soil?

How this translates to you and your use in your garden?

Here I need to be precise. Indeed, in forums and Facebook groups, I read quite a few different opinions and ideas (and quite a few misconceptions). The differences come down to how seed starting mix and potting soil are meant to be used.

On the other hand, potting soil is designed to sustain the long-term growth of herbs and plants but not specifically designed to improve germination.

Seed starters mix, in general, has no nutritional value. This is because seeds are just a pack of emergency nutrients that the seedling will use to its first inch of development until it grows the first roots and leaves. Indeed, think about it. Where the plant takes the energy to develop the first 2 leaves and stems if it does not have the leaves to harvest the energy from the light? A common brand (here on Amazon) clearly declares an N-P-K of 0.06-0.03-0.03. This is a common feature of the majority of seed starting mix.

A potting mix, on the other hand, is nutrient-rich. This is because of the presence of compost of fertilizer (either organic or synthetic). The majority of potting mix I played with had fertilizer in the form of slow-release pellets (they appear as small hard balls into the soil).

One of the best potting soil I tried (the Foxfarm here on Amazon) has an N-P-K of 0.3-0.45-0.05. This is up to 50 times more nutrient-dense (on average) of many seeds starting mix (N=0.06 for seed starting mix against the 0.3 of a potting mix). If you go for more fertilizer aggressive potting mix, as the Miracle Gro, the N-P-K can be even higher.

What seeds need most is a constantly moist and warm environment. Warm and moisture are the perfect environment for fungi to thrive. This is a problem. Indeed, fungi can easily spoil your seeds.

A Potting mix is not sterile, so there are chances for fungi to develop during seedling development. For many, the issue of a fungi-damaged plant is quite important, especially if growing just a few seeds or in case they are quite pricey. However, this “secure” condition (sterile) is just a short term as all plants need to be transferred to soil or on a potting mix.

Seed starter is very often sterile, reducing dramatically the possibility of any fungi to develop.

Seed starting mix is quite often way more airy, fluffy, and lightweight than regular potting mix. This is important to increase the germination rate. Indeed, think about it. The roots developed by the energy on a seed of a few milligrams cannot be massive. The seeds do not have enough energy for those.

Hence, if the soil is compact, hard, with rough material in it, the seed roots have fewer chances to develop. This, in turn, reduces the chances of germination dramatically. As discussed in the good germination practice, this is also why you should not place seeds too deep. The smaller the seeds, the more superficial it should be as it does not have the energy sufficient to develop long stems.

On the other hand, despite still being fluffy, potting soil is generally way more coarse than seed starting mix. Potting soil quite often contains compost that (depending on the quality) might not be totally broken down. Hence you will find (how many times!) pieces of woody material, small stones (if bad quality), and similar. This is not a problem for a grown plant that passed the first delicate stage of development.

Seed starting mix mainly contains peat moss, perlite, and some wetting agent. This is the case, for instance, of the good as the Black Gold here on Amazon. Another seed starting mix, more on the eco-friendly side (moss is a finite resource), is Burbee here on Amazon. This because it adopts mainly coco coir as it has similar (although not as good) water retention capability of peat moss. Hence, at the end of the day, there is just one ingredient.

On the other side, potting mix is a mixture of perlite, compost, peat moss (or coco coir). Such ingredients, to guarantee good water retention capability, and provide plant structure, are usually present in almost equal amounts per volume (a third each). Other “secondary” ingredients (as their weight on the total is lower) are fertilizer (those yellow balls into the soil) and pH corrector (like limestone).

Potting mix is pretty much ubiquitous in all gardening shops. Even a mall with a small gardening area will very (very) likely sell potting mix.

Seed starting mix is way more challenging to find in physical shops, and it is often not part of the gardening item of a more generic shop. Even online, you can find just a handful (around 5) among the most common and reputable.

What Is The Best Seed Starting Mix?

I have to admit that there are a few brands that gained reputation over the years due to their reliability, good quality ingredients. However, if I would need to pick up just one and only one seed starting mix, I would go for the Fox Farm on Amazon below. 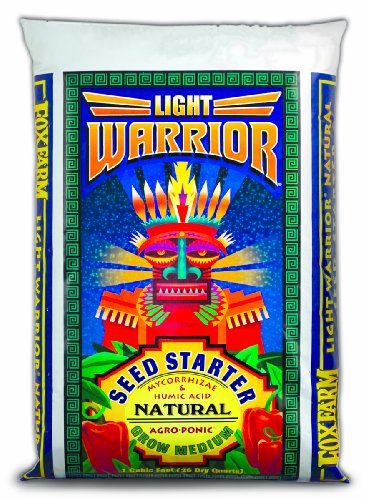 This seed starting mix goes the extra mile compared to the competitor due to a special ingredient, a new entry in the gardening world.

I am talking about the so-called mycorrhizae. As discussed in this scientific study from the University of Manchester, this is a special type of fungi whose name means “fungi’s roots.” As the name suggests, they create a root-like system that “fuses” with the plant root system. In other words, this fungus acts as an extension of the plant root. This means that even a young plant can reach way too much water and nutrients without waiting to develop a larger root system.

Plants grow larger, with more flowers and fruits, and have better resistance both to some pests and pathogens, and stresses such as drought.

This benefits the plant significantly, increasing the germination rate and helping (sometimes massively) on its further development even when moved to a different soil.

Here, a word of caution is needed when talking about mycorrhizae in the seed starting mix.

Can You Use Potting Soil For Seedling?

It is possible to grow seedlings from potting mix, and for many herbs (such as basil, mint), it is relatively easy. If you need to choose one check the one below, it is by far my favorite potting mix. 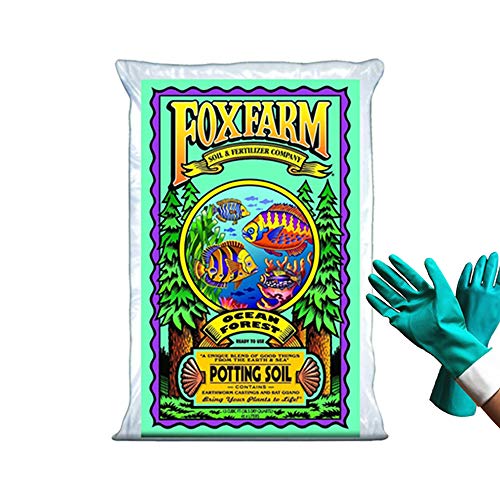 I grow seeds all the time both for pleasure and learning, as you can see in the image below. Please do not place countless seeds in one tiny container as I did in that example. I did just because I used them as a microgreen, but in general, you want to follow the good seedling practice (among them max 3 seeds per container).

Hence, potting soil is fine for seedlings, though it is more likely to cause issues with fungal growth than a sterile starter. Think of potting soil like starting a seed in an outdoor garden— certainly, it works well, but it works well a lesser percentage of the time. The greatest advantage of growing in potting soil is that there is no need to transfer the plant later on. Transplants cause stress that can kill a new plant if not done carefully.

On a side note, none prevents you from doing your own potting mix.

As I discussed before, the seed starting mix’s texture and water retention capability will make the germination way easier. This is very important if you have expensive seeds or only a handful of them. Moreover, compared to potting mix, it is not that much more expensive (considering the value).

The most common mistake with seed starting mix

A few gardeners in forums complained that their seedling died after a “while” in a seed starting mix. That is normal. If they leave their seedlings a month or more after germination, in a growing medium not designed to sustain plant growth, it is normal for the plant to wilt and die. This is independent of how well you water it or how much light it does receive.

Seed Starting Mix and Potting Soil: Are They Soil?

Seed start mixes are not soil. As discussed, they are a mixture (often one dominant ingredient) that is not solid (hence no sand, silt, or clay in general).

You have to know potting soil, contrary to its name it is not soil (this means that you will not find any sand, silt, or clay on it). It is a growing medium given by the combination of peat moss, compost, perlite, fertilizer, and few other materials (lime for pH, for instance).

Of course, do not take my word for granted. Indeed, each manufacturer has its slightly different “recipes” claimed to be the best. Some use coco coir as a replacement for peat moss. In contrast, others avoid fertilizer balls (slow release), and they use more organic solutions (guano, fish meal, etc..).

If you have decided to use a seed starting mix, it may be best to make your own. Seed starters may be sold for a lot, but the ingredients for a basic starter are not complicated.

Make your own seed starter and combine dry peat moss or coconut coir with perlite (volcanic sediment) at a 5:1 ratio. Before sowing your seeds, add water the same amount of water (in volume) to the amount of perlite (remember, the growing medium should be wet before placing the seeds on it).

Should you use a seed starter or potting soil to start your indoor garden?

yourindoorherbs.com is part of the Amazon Services LLC Associates Program, an affiliate advertising program designed to provide a means for sites like mine to earn advertising fees by promoting good quality Amazon.com products. I may receive a small commission when you buy through links on my website.

A young Italian guy with a passion for growing edible herbs. After moving to the UK 6 years ago in a tiny flat, it was impossible to grow herbs outside. So I start my journey in growing indoor and so I decided to share my knowledge.

link to Why Do Bananas Turn Brown? [and In Other 9 Colors]

Continue Reading
link to Should You Mist Your Plants? Myth Busted?

Misting has been a hotly contested topic in the gardening world. It’s a case where you’re on the extremes of the arguments - it’s either you think that it's a waste of time or the secret...

Hi, Andrea here!
If staring at plants made me an odd person, well, probably I am. These living things can grow millions of times their original size, they convert air into wood and can end up in your plate feeding you. As a guy raised in the sunny Sardinian island (Italy), I used to grow for fun all kinds of herbs on our balcony. However, life brought me to the UK as an engineer. Now, all those leaves are indoors due to "sad" weather conditions. If you have ever grown culinary herbs you know that many of them are not a fan of low temperatures (yes basil, I am looking at you!). If you are fascinated by plants as I do and you want some geeky point of view, you are in the right place! If not, well, there are lots of things to do in life that bring happiness...

yourindoorherbs is a participant in the Amazon Services LLC Associates Program, an affiliate advertising program designed to provide a means for sites to earn fees by linking to Amazon.com. As an Amazon Associate, I earn from qualifying purchases. This site also participates in other affiliate programs and is compensated for referring traffic and business to these companies.